All About the Jolly II Rover And Her Crew

The Jolly II Rover and Her Crew

The amazing Schooner Jolly II Rover is proudly owned by Bill Malone and is operated out of Key West’s Historic Seaport. He purchased the Jolly II Rover in 2003 to fulfill a lifelong dream of operating a classic, square rigged, topsail schooner.

Several years later you could say that fate intervened. Hurricane Katrina passed through New Orleans and blew the Jolly II Rover back to Florida where the tall ship belongs – among the traditional sailing ships, both mercenary and merchant, of the Historic Seaport of Key West. 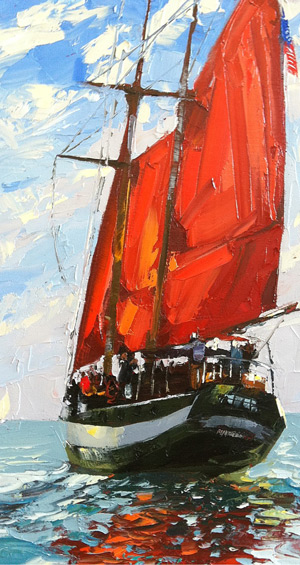 Over the years, the Schooner Jolly Rover has been featured in countless magazines, newspapers and blogs for our iconic red sails and legendary sunset cruises. We have hand picked several of our favorite articles from USA Today, National Geographic and more.

Kimberly Klimek
We had an excellent experience. The owner and all of the crew were awesome! Highly recommend.

Neal
My Wife and I sailed on this ship last night for a sunset cruise. The staff and experience were more then exceptional! Especially the cannon fire, worth every penny for that alone!

Ben Nesler
So, first of all, amazing time on board the Rover. Relaxed vibe, lots of “participation” in sailing for the passengers, but what REALLY sets this crew apart is their helpfulness. Upon disembarking, I dropped a Birk into the bay. Fortunately, thanks to the JR mate With the dip net, my sandal was saved!! Cheers to the crew and Captain Bill!

Steve Klayman
The sunset cruise was one of the highlights of our honeymoon. The captain (I'm sorry, I forget your name) was a wonderful tour guide and his crew was very professional. The boat is absolutely beautiful, as is the local scenery. We were on the cruise where they put up their square (I think) sail for the first time since hurricane season started and it was cool to see how excited the captain was to do it. We will definitely cruise with them again.

Pau Martinez-Munevar
This is our second time on this sunset cruise. We absolutely loved it! The boat is beautiful, with a lot of character. We have two boys, 5 and 7 and it was perfect for us. They got to raise the sail, and play captain for a little while. At the end they received a small bag with a little treasure as a keepsake! We were able to bring our own drinks and snacks too which was perfect. The staff was super friendly. We saw some of the other boats extremely crowded, some with loud music. Definitely more of a party vibe. But if you are looking for a more intimate experience on a sailboat, and family-oriented, this one is perfect. Highly recommended and planning to using them in the future.

Marsha Frank
The best sail ever! This is not s booze cruize. This is serious, spiritual, life changing sailing!

Many locals as well as visitors are repeat sailors. And we love seeing familiar faces, so we offer $10 off your second sail and your third sail is FREE!

Where to
Find Us